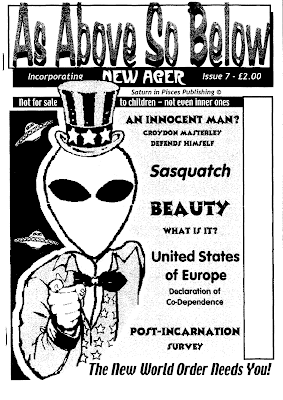 So there we were in our own little world, with two heads full of ideas and the freedom to express them in our own publication.

David and I had already realised that there were more things in heaven and earth to make fun of, so a name change was in order. Coincidentally, we also discovered that another magazine existed – called New Age magazine. In a flash of David French inspiration – and before you could shout “Lawsuit.” – As Above So Below magazine was born. (And to think we’d considered Kindled Spite among the options!)

We started to take the whole enterprise a bit more seriously, surprising our loyal readers, both with our inventiveness and a price rise to £2.00. By now we had our fans and our detractors (humourless new agers, you know who you are). Issue 5 proudly carried a cover cartoon cover of two ETs in a café, asking the waiter for ‘Cow’s arse and chips twice, please.’

We were influenced by anything and everything – books we’d read, magazines we’d trawled through, the news, even people we knew; all went into the mix of satire, parody and nonsense. Using Apple Macs, we were able to improve the graphics and generally professionalise everything. I say ‘we’ but David was and is the creative engine for the look and feel of the magazine.

The regular characters developed traits and back-stories organically . Croydon Masterley, the (self-proclaimed) New World Teacher and his lovely wife Marjorie, in their orbiting space-station Orgasmir, offering tantra workshops to passing extraterrestrials and avoiding their tax returns; John Phoenix, private investigator, seeking conspiracies in the phone book and train maps; Colin Smith and Geoff Nimbus bestowing their world-weary cynicism – usually in workshop form; Mistry DuMont channeling all and sundry and forever changing her name; and presiding over everyone, the editor-in-chief Sheldon T Packett, frequently aboard his yacht the Saucy Logos. Like all good creative fiction, they become real to the author. We sat in pubs and discussed how they each felt about one another, and whether John and Mistry would stay in her flat above the chip shop if they got engaged.

By Issue 6 we had seven outlets, across the UK. We were still small scale though and our unwillingness to operate on a truly commercial basis imposed its limitations. It meant that every time we produced another edition, we had to warm up some of the shops from scratch. Or, we found that they were no longer interested, or even still in business. Some still hadn’t paid us for the previous issue. As Above So Below was still great fun but it was also starting to feel like hard work.

Every successful writing partnership is a combination of collaboration and healthy competition. By and large we were achieving that, eyeing one another’s output with a mixture of appreciation and envy. There was an attitude cycle that will be familiar to every writer. First, we loved what we’d produced then we despaired at its clumsiness and all the errors. Then we edited it to the point of indifference, where it didn’t seem like our own work at all. It was only usually after we’d published that we could finally enjoy the mag for what it was.

In hindsight, we were still vague about where to take As Above So Below next. We still nurtured aspirations of creating a cult following. And I saw one way of doing that by using merchandising – a few t-shirts here and a few postcards there. The revenue would also give us some tangible reward for our efforts (and the cost of the Macs). Maybe one day we’ll get round to it.

Reader opinion was still divided over whether the magazine was any good. Father Lionel Fanthorpe (Remember him – the motorcycling, mystery investigating reverend off the telly?) proclaimed that we were ‘good satire’ while another reader urged us to print his own work and insisted that we were ‘funny but not actually satirical … good satire should be philosophically stimulating.’ That letter was the only thing of his that made it to the page, under the tag line ‘Readers tender their jewels.’

To be honest, we were happy for any feedback, even a little controversy. It’s maybe why I wrote a piece about the United States of Europe’s Declaration of Co-dependence, a considered parody of that famous US document.