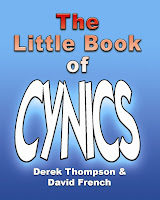 Someone recently asked me about my membership of the Society of Authors. ‘How come,’ they said with an arched eyebrow, ‘You’re a member of the society but you’ve yet to have any of your novels published?’

Well, seeing as you asked …

For years, on the quiet, David French and I have been producing our own magazine: As Above So Below. It’s an eclectic mixture of spoof articles, features, adverts, de-classifieds and cartoons. Our subject matter is equally diverse – religion, philosophy, natural medicine, environmentalism conspiracies, politics, consumerism – you name it and if we can find an angle, we’ll have a go.

The plan had always been to use the magazine as a springboard to greater things – scriptwriting, books and all manner of media experiments. So in 2004, I collated a collection of our pithiest sayings and sent them off to various Little Book publishers. Crombie Jardine said they were interested but their acquisitions budget was spent for the year, and invited us to resubmit in the future. As no one else (Michael O’Mara, Summersdale, Pocket Books, etc) wanted to take us up, we bided our time.

In 2006, having rewritten the 100 quotes and quips then organised them thematically, we went back to CJ. Success! They liked the book and offered us a contract for 2007. It was a standard buyout contract, a one-off payment in lieu of royalties. I joined the Society of Authors to get the contract looked over, considered their advice and went back to CJ with a suggested revision (upwards).

To be fair to CJ, they were absolutely straight with us and explained their model and why they were offering what they had. And, naturally, we were free to take our book elsewhere if we thought we could get a better offer. Cue: a large plate of humble pie to two hungry writers. We took the deal and in Sep 2007, The Little Book of Cynics (no longer The Little Book of Croydon but still referred to affectionally as LBOC) graced the shelves of Waterstones and others.

The interesting thing, some three years later, is that we did better out of the buyout deal than we would have under a standard royalty arrangement. Realistically, we were never going to get rich from LBOC, but I believe it has opened the occasional door when touting for comedy writing. It also taught me a lot about the business of books, and why it is vital that writers understand how the business works so they can play their part effectively.

I have put together another four Little Books since then, all currently on circulation to other publishers (CJ advised that they’ve shifted their publishing focus in the last couple of years) and all available to good homes. I would say ‘no reasonable offers refused’ but, as you’ll see in a future post, I do draw the line somewhere.