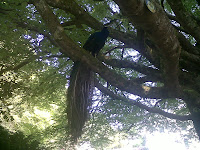 No, I didn’t know peacocks could climb trees either. That’s the great thing about life, it continually throws us curve balls, surprises and surprise curve balls.

I recently broke a cardinal rule of writing: thou shalt not revisit an agent who hast declined thy work. I started with a letter outlining our previous interactions and explaining why I now thought that agent was appropriate. In the meantime, I revisited Standpoint and reduced down to an impressive (for me) 102,000 words – the shortest it’s ever been since I first completed it, some time in the Jurassic Era.
My approach was a little more considered this time than just sending in a synopsis and manuscript sample. I also sent in some positive feedback from a publisher’s editor who ultimately declined Standpoint, but who still had some good things to say about it. And I sent in a critique report I’m purchased and acted upon. And finally, I sent the positive feedback from www.youwriteon.com (look for Standpoint if you’d like to read some of it).
The agent went through everything I’d submitted and wrote back to him, indicating why they thought they were not the best fit for my work and suggesting some other places I might try.
In my response, I also asked if they’d like to see an extract from Scars & Stripes and they said yes! So now I’m in the happy position of revising chapter 1 and creating a new synopsis. Which just goes to show, as one of the characters says: If you don’t ask, you don’t get.