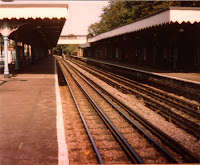 Do you have a friend who consistently gets a fact wrong, even if it’s a detail about an event that you’ve previously corrected them on? It’s as if that piece of information is permanently misfiled or corrupted – the memory equivalent of two synapses stuck in a death grip handshake.

It reminds me (no pardon intended) of False Memory Syndrome, which has been offered up as an explanation for some allegations child abuse or alien abduction. My own particular false memory is less contentious, but no less puzzling.

Our dad died when I was twenty-two and our mum followed him, about four years later. However, I also have these pseudo memories, of dad outliving mum and there being just dad, my brother and I, living in the house.

It’s only a quirk of imagination of course, unless the idea of parallel universes periodically intersecting ours appeals to you. But that empirical understanding has never changed the quality of the experience for me. It’s as if I have two competing sets of memories – the one, sharp as a scalpel; the other, hazier, as if trying to recall a film you saw long ago. And both have endured over the years.

Part of the process of writing, I think, involves the writer undergoing a journey of self-revelation. The more we write, the deeper we dig, and as our characters and plot and dialogue unfold, so we see more facets of our self. Rather than hiding in our work – irrespective of the genre or how far-removed from our own experience the ideas might be – I’ve come to the conclusion that we actually want to be found: the writer revealed.

Good writing is authentic – it shows us what it is to be a living, breathing and feeling human being. It doesn’t matter if the stories are comic or tragic or dramatic or undemanding, whether they inhabit the past, present, future or never-could be. Human, alien, animal, faery, robot or fridge – it’s all the same as long as it touches us.

And why this, now? I’m glad you asked!

As I’ve been working through the first draft of Scars & Stripes, reviewing my memory of real events and seeing where imagination can trip off the page, I’m aware that the line between truth and fiction is becoming blurred. The emotions (and in some places, the dialogue) from one world are being siphoned off into another of my own making.

The interesting thing though is that, having decanted real events into fiction narrative, I have a much clearer perspective on both the vintage and the nouveau.