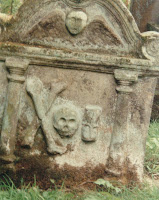 So there we were, watching the telly last night. Jo Brand was on fine form, hosting the last of the current series of Have I Got News For You. And slap bang in the middle of the programme, Ian Hislop mentioned a new word to me (not to me personally, I’m aware there are many other viewers as well as a studio audience): taphophile.

So Anne, who does not enjoy the idea of appearing in this blog, looks in my direction and says, “That’s what you are.” Now, I’ve always thought I like a good graveyard as much as the next man (or woman – taphophility is an equal opportunity pastime), but it turns out that I like it more.*
A graveyard can be a haven for nature and one of the few places to see a decent yew tree. There’s social history there too and, more importantly, personal stories. It sounds obvious to say it, but these were real people who lived, loved and went the way we’re all heading. I find all of the above both sobering and cause for reflection. As a writer, I also draw inspiration – from the names, the poignancy of the dedications, the artistry of the headstones and the sheer atmosphere of the place. I’m also drawn to war memorials, but that’s another story.
Writing about death and mortality in fiction can be a test of nerve, sensitivity and skill. Most adult readers will know what death and grief sound like, smell like and feel like. Whether it’s a thriller, a fantasy novel or even a comedy (I can only speak for myself here), we aim for authenticity. And the way we do that is to draw upon our own experience or our imagination of that experience. I haven’t gone so far as to borrow names from headstones yet, but I have tried to draw on the mood of the graveyard and what it represents – peace, closure, loss and anger. In the end, I suspect, we’re each exalted in that final scene or brought down to earth by mortality.
Writing about death and grief in non-fiction is another ball of beeswax. I’ve commented on that before so rather than repeat myself, here’s that link:
http://alongthewritelines.blogspot.com/2009/08/crossing-line.html
So here’s to you David.
* The picture was taken in Scotland. We were visiting Roslyn Chapel and I wanted to check out some supposed Templar or Masonic graves. I suppose that’s a little exotic even for taphophiles!