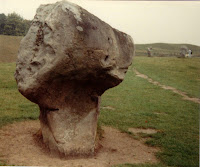 Creative thinking and the use of the imagination are often hailed as two of the secrets to productivity, originality and a whole bunch of other ‘alities’ (except banality). Most people can remember a time when, as children, we would play as characters from TV, the cinema or books, or even from our own imaginings.

I’m sure I’m not alone (it would be interesting to do a poll) in still remembering some of those characters even now, as an older child in my forties. I may have been a little unusual though in also having subsidiary characters and subplots as well.
One of the highlights of corporate project meetings, for me, was during the Ideas phase when we would brainstorm scenarios (before brainstorming became thought showers and after it had reverted, last I’d heard). Apart from the endless pleasure of calling out the first thing that came into my head – knowing that the scribe was duty bound to record everything, no matter how seemingly nonsensical – there was also the opportunity to try on different viewpoints and approaches. One way of achieving that by playing a part – designer, engineer, user, marketeer, customer, etc.
Of course, however much we may invent a character – whether it’s in writing or for a specific function (first date, interview, new identity), there is always an element of us in there somewhere. And that element reveals something about us. In the case of some project meetings, it probably revealed my desire to do something different. Persona non gratis, you might say (unless you had a classical education).
I was thumbing through an old notebook recently and discovered a monologue, written from an invented character’s viewpoint. Like the very best of first draft material, it was written at a gallop, with very little filtering going on – just a voice and its ideas rampaging across the page. It never made it to a second draft because I couldn’t find a use for it, in anything I was working on at the time. What comes to mind now is a surly patriarch, trying to instil wisdom while his apprentice struggles to grasp what he’s really talking about.

The tyranny of time is the tyranny of the mind. Its currency is certainty and inflexibility. Blinded desire is its ally. To be free we must free ourselves, purge our fixed expectations and let go of long held and cherished perspectives. Lose ouselves in the void to emerge cleansed, victorious and liberated.

Peace isn’t merely the absence of conflict. It is the conditions in which confict is unable to flourish. Peace, like conflict, is a harvest. The ground must be prepared, tended and nurtured. The seeds must be planted long before the reaping and the crop attended to. And when the harvest has been gathered, what reminds must be ploughed back to resume the cycle.

Creativity requires us to make contact with that inspirational spark and to let its mystical flame engulf us. It is a process of connection and reception, and can be learned.

What we are each here to fulfil is the expression of our own essence. The courage to pur our souls into the cup of experience and drink it back in a banquet of becoming.

Everything you have felt, have known have dreamed – all lies within you. Ready to serve as your guide, your warning and your inspiration.

Lift yourself free from your burdens. Set the baggage of your past and the imagined future to one side. Rest at the roadside and wait. Is it yet too late to change your journey?