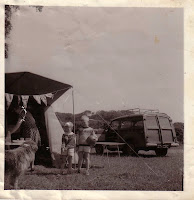 I’ve spent a little time this week scanning in photographs for blogs-to-come and as memory joggers for Scars & Stripes. Following feedback from Anne, Susie and Monika, I’ve decided (I think) that S&S works best when it’s 1st person and more honest than the first draft appears to be. Warren was definitely right that 3rd person opens the book up, but having recently read Michael Wright’s C’est La Folie, I’m thinking about approaching the book from a different angle.

The picture here is almost certainly from West Runton campsite in Norfolk. The car – as most of you will know – is a Morris Traveller and that special hound on the left is Tess. David is the one holding the football. Mum is probably making tea and dad is taking the photo. I’d forgotten this picture existed – there aren’t many of Tess.
The photo is a nexus point for so many different streams of thought and recall. The pennants were from the camping club of Great Britain and Northern Ireland – they mainly showed all the places mum and dad camped before we came along. The Morris Traveller was one of a succession of cars, all smelling of vinyl and dog (ours).
I remember car sickness, the way my bare legs would stick to the vinyl in the heat, the handles for the windows and those jumpers that mum knitted for us. I remember the feel of the deckchairs and how they’d topple over at the slightest provocation. I can still hear the sound of the aluminium pots and pans, and the way the table legs used to screw in.
And those trails that lead off into their future and my past. I remember years later, meeting Carl Nunn while climbing the oak tree on the site and the first words I said to him, “Oi, Tarzan, want any nougat (which we pronounced nugget back then)?” He came from Cambridge and had a collie dog and a penknife with a rabbit’s foot at the end.
I remember being 11 when Tess died and not knowing how to cope with the grief. And then at 13, we went camping in Somerset and it felt like the end of a chapter of my life.
So many points of reference from one photograph, all of them bathed in emotion and significance. And that’s what I’m aiming for now in Scars & Stripes.