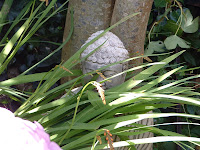 “Mummy, why doesn’t Uncle Malcolm ever stay to dinner?”

“Well darling, Malcolm is something called a vegetarian.”

“Is that a sort of religion?”

(Frowns.) “No dear, not exactly. Uncle Malcolm has certain beliefs about what he eats.”

“You mean tigers and lions and giraffes and elephants?

“No dear, no one eats those. I’m talking about cows and sheep and pigs and chickens.”

“Yes darling. So that’s all cleared up then.”

(After a millisecond pause.) “But why doesn’t he want to eat them?”

“Oh, I don’t know. Maybe it’s because they have legs.”

“So does Uncle Malcolm eat fishes then?”

“So is it because they have eyes then?”

“Perhaps that’s it; let’s talk about something else.”

“But mummy, didn’t you tell me that potatoes have eyes. Does Uncle Malcolm eat potatoes?”

(Heavy sigh.) “Yes he does. And potatoes do have eyes, but it’s not the same thing.”

“So what’s different about a potato’s eyes? Are they on the back of its head?”

“A potato doesn’t have a head.”

“Then where does it keep its eyes?”

(Heavier sigh.) “Eat up; your dinner will be getting cold.”

“So… about the potatoes. Does Uncle Malcolm eat them because they’re a vegetable and he’s a vegetarian?”

“Yes dear, how clever you are to have worked all that out by yourself. Why don’t we have a little rest from our conversation now?”

(Pause for two bites of food.) “Do potatoes have noses as well?”

“Now you’re just being silly, when have you ever seen a vegetable nose?”

(Narrows eyes.) “When we had a snowman, he had a carrot nose.”

(Casts eyes to the floor.) “Yes, I suppose we did, but that was different.”

“Because the snowman wasn’t a vegetable?”

“About Uncle Malcolm, mummy; why doesn’t he eat animals then?”

“I don’t know dear, why don’t you ask him next time we see him?”

“But you said we weren’t to discuss it and you told Uncle Malcolm he wasn’t allowed to say anything to upset me.”

“Do animals eat other animals?”

“And do animals eat vegetables?”

“Yes, sometimes they do.”

“But animals don’t eat crinkly chips, do they mummy?”

“No darling, not crinkly chips.”

“Except our dog Jambo – he likes chips.”

“And Jambo likes meat from a can as well.”

“Why don’t you tell me what you think?”

“Erm… I don’t know. But potatoes could see the other vegetables, only they don’t have any teeth.”

“Is that why we eat fish and chips together?”

(Gazes at ceiling for inspiration and divine intervention.) “Probably.”

“But I still don’t see why Uncle Malcolm only eats vegetables.”

“Alright, you win, I’ll try and explain. He doesn’t want to cause suffering, directly or indirectly, to another living thing. Does that help you?”

“So they are alive?”

“Everything is alive, sweetheart.”

“But you said everything. And what about rocks and rivers and… and… mushrooms?”

“So why does Uncle Malcolm eat vegetables if they’re alive?”

“Because Uncle Malcolm has to live too, otherwise he couldn’t visit us on Saturdays and bring you nice presents.”

(A long silence.) “I think I might become a vegetarian when I’m older.”

“That’s lovely dinner; now finish up your burger because your fries are getting cold.”