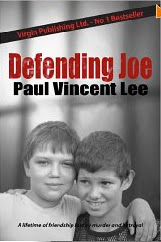 Often in a novel, alongside the protagonist, antagonist and a host of other characters, there will be an additional presence. I’m talking about the location. Sinclair Macleod’s series that started with The Reluctant Detective is based in Glasgow and that’s also the setting for Paul Vincent Lee’s debut novel, Defending Joe. I caught up with him recently over email and put him on the spot.
What sets Glasgow apart for you?
My debut novel, “Defending Joe”, is set in Glasgow and although that can maybe be seen as a little bit unadventurous it did make it easier to visualize scenes so it does have its advantages.
Just as can be said for any relationship, whether it be with a partner, kids or whatever…you can love something but not actually like them all of the time…and that is how I feel about Glasgow and, indeed, Scotland. But it has undoubtedly shaped me as a writer…for better or worse.
How did your main character appear and did they change from your first draft?
My main character changed dramatically from the initial idea…not least in that it changed from a woman to a man and from a cop to a civilian.
What made you decide to go down the self-publication route and what have been your main lessons?
I guess self-publication came about through a mixture of not getting any mainstream publishers to take me on, although Canongate were encouraging, and a drive to just move things on in whatever way I could. I certainly don’t regret the journey although it was stressful & frustrating at times especially if, like me, your I.T. skills are limited! Lesson…Just Do It.
What comes first for you – plot or character?
Neither! An idea for the beginning of a story takes shape and I let things flow from there. The best thing I saw written about a story was by Stephen King who says that stories are like unearthing a skeleton…you slowly uncover it without really knowing what it is until it reveals itself to you.
What are you working on at the moment?
To be honest my main focus at the moment is marketing “Defending Joe”. I know some writers claim not to be interested in sales, and I don’t quite understand that, but I am as my dream is to make an acceptable living from novel writing. That’s not to say that writing isn’t involved, but what I am trying to do is learn the “business” side while pondering the writing side.
How would you define the Glaswegian character?
Funnily enough I feel there is a close link between drama and comedy in the Glaswegian psyche. Glaswegians love self-deprecating humour and laughing at the absurdity of life, which is often reflected in laughing at tragic situations.
Where can we get hold of a copy of your book?
The book is available now on Kindle and will be available on Amazon at the end of the month or from my website: www.paulvincentlee.com.