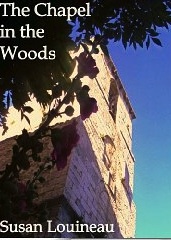 Once upon a time, not so long ago* – all right then, it was only back in August, Susan Louineau sat in the virtual chair and told me about her ebook, The Chapel in the Woods, which she self-published this year.
Unlike me, Susan has a track record in marketing and put all that knowledge and experience to good use by creating a buzz for her book
I caught up with her recently, in a cafe overlooking a windswept harbour, where she attempted to enlighten me about the joys of being a successful self-published author.
I had my peppermint tea in one hand, a forkful of chocolate brownie in the other, my notepad on the table and ears pricked up. Who says men can’t multi-task?!
What made you choose to go with Kindle from the beginning?
To be truthful at the time I didn’t realise there were so many platforms for epublishing but I think I chose the right one as I’m not sure there are many souls in this world who haven’t bought something from Amazon at some time or another.
Which has been the best social media tool for you?
Twitter wins it hands down on this one.  When I first published The Chapel in the Woods I told all my friends on Facebook who were extremely loyal and downloaded it and some even read it and reviewed it favourably.  I quickly realised that once my personal connections had been exhausted I wasn’t going to sell very many.  If no one knows about your product they can’t buy it! I was no social media fanatic and had seen no use for Twitter previously but as soon as I started gaining new followers and following  the example of other authors the books began to sell and the reviews came rolling in.
At what stage did you put your marketing plan into action, and would you change it for future books?
I put it in action really rather late.  Next time I will start creating a buzz about the new one as soon as I have completed the first draft.  Now that I have established a worldwide readership I have a significant number of customers who are eager to read the next one and provide reviews early on.
Can you explain the logic of the Kindle giveaways? Call me stupid, but I don’t see how giving away books can encourage people to then buy them.
When you self-publish with Kindle you are initially an unknown entity.  Your book appears on the Amazon rankings to begin with quite high up, CITW came in at 4,000 in Fiction; which may seem terribly low but out of half a million novels that’s actually not bad**.  If you don’t sell many your ranking quickly slips.  Let’s face it we’re all a bit lazy and when we open our Kindles/e-readers to browse for something to read we will look at the top 20 or 40 most of the time but often won’t go any further.
Kindle has both a free chart and a paid chart which appear side by side when you open your device or view on the website.  If your novel is languishing at the bottom no one will know it’s there.  We all like a freebie and giving it away for a set time period, two days in my case, will send it up the free chart and hopefully to the first page for the world to see.
What’s your progress with your current work-in-progress, The Weather Gods?
I am still in the research and plotting phase for The Weather Gods.  It is important for me to learn something new when I write a novel.  CITW taught me about life in the Dark Ages in both England and the feudal Loire Valley and the struggles of the resistance and SOE Agents in the 2nd World War.
The Weather Gods is opening up a whole new raft of knowledge for me; from meteorology to celtic mythology. Writing has given me the opportunity to be an eternal student, for which I feel blessed.
I mentioned that your marketing approach has really worked for you so, without giving away all your secrets, what were some of your goals and the results?
I heard that the average sales for a first novel are around 300 – 500 in a 12 month period; I decided to set my target at the top end.  CITW smashed this target in just 2 days after the free promotion ended.  Having reached #3 in the Free Fiction chart within 40 hours, it hit #2 in Amazon’s paid UK Spy Stories category by the fourth paid day.
In your opinion – and this is a biggie – is it possible for a part-time cynic with maybe half an hour a day to make a difference to the success of a new ebook? I ask because my own self-pubbed fantasy, Covenant, should be out soon. All tips gratefully received!
Absolutely!  The best advice I can give is to start networking on Twitter and find the people who will be delighted to read your book, review it and tell their friends.  There is a very supportive network of self-published authors on Twitter who are more than happy to read and spread the word about your work.
One of the biggest pleasures I have discovered is reading other indie authors’ work in all kinds of genres that I would almost certainly never have picked up off a bookshop shelf.  I have discovered a plethora of talented writers that have unexpectedly extended my range of personal taste in fiction.
Now that The Chapel in the Woods has begun to make a name for itself as an ebook, have you considered making the move to paperback as well?
Yes, I have begun the formatting process for a paperback edition for all those who are reluctant to indulge in the current e-reader frenzy and I hope to release it in time for Christmas.
Links please!

My Twitter handle is: @susanlouineau and you can find me here – https://twitter.com/susanlouineau

* And if you enjoyed the tune, check out this:
https://beginnerguitarhq.com/best-christmas-songs-for-guitar/