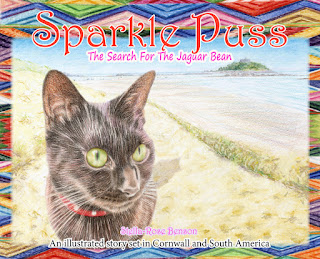 Stella Benson is a fellow writer, based in Cornwall. Unlike me, she’s also a talented artist who has worked on many prestigious animated films including ‘The Snowman & The Snowdog’ a sequel to the ‘The Snowman’, to be screened on Channel 4 this Christmas.
In 2011 Stella combined her love of storytelling, illustration and design to create her first book ‘Sparkle Puss: The Cornish Chocolate Apothecary’.
Her latest book ‘Sparkle Puss: The Search For The Jaguar Bean’, is launched on 3rdof November 2012. I caught up with her ahead of a book-signing tour around the Far West.

We can skip the ‘dogs or cats’ question, but what was it that gave you the inspiration for a cat’s tale?

I have always enjoyed writing about my daily observations especially when travelling.  In 2006 I acquired a kitten. I had always wanted two kittens that I could call either Galaxy & Mars or Frankincense & Myrrh. I named the kitten Frankincense and abbreviated it to Insie. Insie is a striking cat and with her amusing and intelligent nature, she soon started to inspire me to draw and write about her.  I initially started e-mailing one of my sisters, Susie, keeping her updated with ‘the Insie antics’.  With the drawings developing and the Insie antics growing, it seemed to be a natural progression to put it into a story. I make jewellery using glitter and rhinestones and became aware that Insie started to sparkle with the glitter that she was inadvertently picking up in her fur.  In 2007 the story of ‘Sparkle Puss’ began.

Which came first – the cat or the chocolate?
I suppose the chocolate came first, although I had been wanting a cat for ages. However my study of and interest in cacao and good quality and ethical chocolate really came first.

Your beautiful illustrations have such a vibrancy about them, have you considered creating animations of your books?

Thank you, yes I have been thinking about animating my books. I have contact with some of the very best animators, and background artists, etc. to enable the production of  what could be a really good film. It is only the funding I’m lacking as yet!
Are you conscious of wanting to convey an environmental message in your books?
The environmental aspect is very important to me. I’m passionate about organic production, and fair trading where possible.
What does the future hold for Sparkle Puss?
I can not know exactly, I have a third story outlined and I hope I will be able to produce a third book in the series. I really have to thank the people who bought the first book as the sales have financed the second book. At the moment that is how I am progressing, taking each day as it comes. Ideally I would like to find a publisher.
What was your journey from inspirations to the printed page?
It took over 4 years to produce the first book. Having not been through the process before I had to learn as I was going along. The second book was much quicker to produce as the story was written a few years previously and I had a much better idea of how to put the book together.
What do you wish you’d known when you first started writing?
I can’t think of anything in particular, it’s all hard work, never easy!
Do you wear different hats as a writer and an illustrator?
Not really, although it does require using different parts of the brain and I am very aware of that, that they require two very different applications. However perhaps my writing is able to express more about the environmental aspect. And my truffles are created with organic ingredients.
Where can we find out more about your books – and the chocolate of course!
More information can be found on www.sparklepuss.co.uk.
My books are available from The Edge Of The World Book Shop, Penzance.
And available to order from all good book shops, and from Amazon:
http://www.amazon.co.uk/Sparkle-Puss-Cornish-Chocolate-Apothecary/dp/0956440207 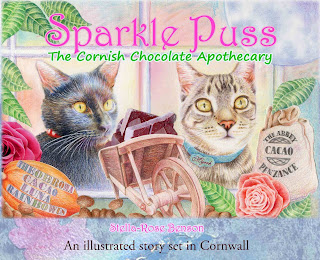