As Twitter reminded me today, according to Albert Einstein, doing the same thing over and over, while expecting different results, is a sign of madness. Or it could have been Rita Mae Brown. Anyway, whoever it was, they had a point. Self-publishing is half of an ‘A frame’ and without the other half – Self-promoting – the whole enterprise is soon on the ground and covered with footprints.


Two friends of mine – Sandie Sedgbeer and Sue Louineau – have been urging me to try a freebie giveaway of my novel Covenant on Amazon. As they’re both authors, I should have realised they knew what they were talking about, but I resisted because it made no sense to me.

As I write this, Covenant is buoyant in the charts and garnering new readers (you might say they’re only downloads at this stage, but people have been contacting me as well, so there). Sue, meanwhile, has become my de facto campaign manager, which is both kind of her and brilliant for me, since she speaks from experience.

So, what have I learned about giveaways on Amazon so far?

1. Community is everything. That means not only letting people know in advance what you’re doing, but also engaging with people when they contact you.

2. Twitter is your playpen. Eat. Sleep. Tweet. Or better yet, schedule your tweets so that you get to eat and sleep.

3. Be creative. So far, I’ve opted for quotes from the book, questions and the occasional translation into Japanese. Keep it fun too.

4. Track your progress on Amazon. It’s sounds obvious, but the metrics help you tweak your campaign as it’s happening. That could include translations, specific cultural references or different approaches.

5. Be aware that the gains may not be immediately realised. Of course, it would be great if there’s an upswing in Covenant sales straight after the freebie period – I defer to Sue on that one. However, more importantly, more people will have heard of your book and had a chance to read it. That could mean more reviews, more author contact, and possibly offers of chocolate and free holidays. I may have exaggerated that last part.

I’ve love to hear your experiences, be they positive or negative, of the ebook giveaway on Amazon. I promise to report back on my figures when the party is over. Okay, time to get back on the campaign trail! 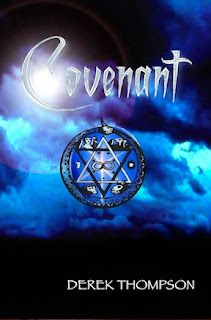 Around 60 tweets sent out (probably more, but I lost count). Half a dozen favourited. Copious retweets, especially by Sue (see above) who flew the flag and went beyond the call. I sent one tweet out in Japanese and one in German, when I saw a single download from each country. I also sent one out in French, which made no impact.

No 4 in the UK Kindle freebooks for Fantasy – Visionary & Metaphysical.

No 16 in the US Kindle freebooks for Horror / Occult

The giveaway scores on the doors:

I’m not sure how long it takes actual sales to follow-on, so I await the next stage with interest.