Creativity serves many purposes. It can take us on journeys of the imagination, enable us to present new and interesting ideas to others, and even allow us to begin to heal.

My friend, Villayat ‘SnowMoon Wolf’ Sunkmanitu, uses photography and poetry as a coping mechanism for living with PTSD and also as a way of raising awareness about PTSD and the therapeutic benefits of creativity.

Having produced Words of a Wolf, The Way of the Wolf and Soul of a Wolf, he has created an exhibition, Living with PTSD, which shares his work along with insights he has gained from the spiritual traditions of the Native American Lakota tribe.

The exhibition will be housed at various locations across the UK and is showing from 5th – 30th November 2013 at Leicester People’s Photographic Gallery, 2 Wellington Street, Leicester LE1 6HL.

There will be a chance to meet Villayat on the opening night from 6:30pm – 9pm on Tuesday 5th November 2013.  You can find out more about his work by visiting his website: www.wolf-photography.com.
He would also be happy to hear from you if you have a suitable UK venue for hosting the exhibition. Please contact him via his website. 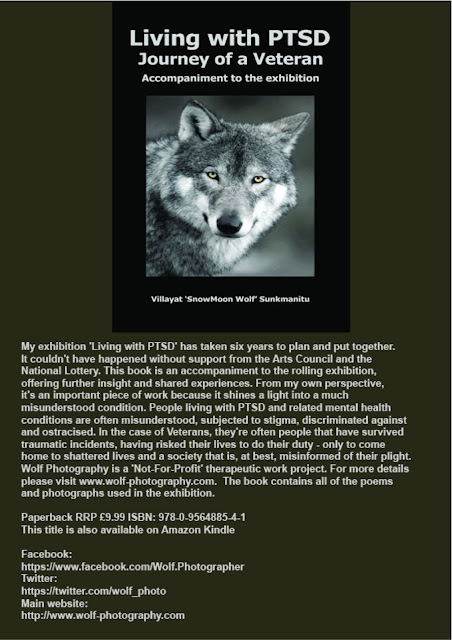 VILLAYAT ‘Wolf ’ Sunkmanitu has gone to extreme lengths to cope with the daily struggles of post traumatic stress disorder. The former RAF policeman, who was stationed in Northern Ireland in the mid 1980s, has been down the conventional route of NHS therapy and private counselling sessions and tried less orthodox methods by spending time with Native American tribes who practise healing ‘Earth Medicine’.  Staying mainly with the Lakota tribe of the Great Plains in North America helped him explore the root of his PTSD.
The 49-year-old, who grew up in Highfields, Leicester, says: “When you’re learning about ‘medicine tools’ from teachers of this path, you’re learning about working on your spirit – your soul – and it’s a holistic form of medicine that affects your mind and body too.”
Numerous visits to indigenous tribes also enabled him to explore an affinity he feels with wolves and is where the name ‘Snow Moon Wolf’ was bestowed on him by one of the teachers, White Eagle. There, in the wilderness, he was able to photograph wolves and for once, away from the rat race, he felt at peace.
Photography is not the only coping mechanism he has found to handle PTSD, which has wrecked his opportunities to work and forced him to retire on health grounds.  Poetry is also a form of creative therapy – although his poems don’t make comfortable reading.  Titles such as Inner Turmoil, Survivor and Demons in my Soul clearly expose the torment, alienation and stigma he feels.
Villayat, who was born to Indian parents in the UK, says: “PTSD can be very debilitating. When you have a physical injury that people can see, they seem to be more comfortable with you than dealing with an invisible wound.
Villayat went undiagnosed for 12 years – a time he refers to as “hell.” As well as his own emotional difficulties, there’s a sense of injustice and anger about the way he believes many veterans of the Armed Forces have been let down by politicians.
It is 30 years since Villayat left the RAF. He was 19 when he was sent to County Down, Northern Ireland, for a two-year tour in 1983, assisting the RUC and other units engaged in counter terrorist activities. He attributes the mental scars to suppressing his fear during incidents he was involved in as part of his duties and an explosion in Belfast. Anxiety, hyper-vigilance, depression, forgetfulness, disturbed sleep and flashbacks became part of his everyday life and it wasn’t until 1995 that he was officially diagnosed with PTSD after a serious road accident.
Even after diagnosis and treatment, he still can’t cope with busy places or potentially troublesome places so he avoids pubs and concerts and would rather be in the wilderness than walk down a city street.