One of the toughest challenges for an author is letting your characters (your literary children) grow up and gain their independence. It’s a curious and somewhat dissociative process to enter into a dialogue with a character you’ve created, as far as you’re aware, and find that they not only answer you back they also surprise you with their responses.

Some characters start out as the antithesis of the author, while others are more nuanced – they reflect some personal values and reject others. Compound or composite characters, drawing from several people both real and imagined, tend to have the most rounded psychologies.

In my opinion it’s the flaws that make characters interesting. The slip of the virtuous, the villain who is fond of cats, or the knowing femme fatale – they all reveal a conflicted self and a struggle against one element of their own nature.

Generally, I think, when we are personally repelled by one of our own creations (or any strong emption, come to that), we are probably on to something.

Characters allow us to explore the shadow side of our own psyches; they are, to a degree, an expression of us but also a rejection of us. They are secret selves and parallel selves and selves without our constraints and conditioning, unguided by our own moral compass.

As an author I create or encounter situations on the page where characters behave in ways that are as foreign to me as a weekend on Gannymede. However, like most parents, I never disown my literary children whatever they have done. To paraphrase Jessica Rabbit they’re not bad, they’re just written that way. 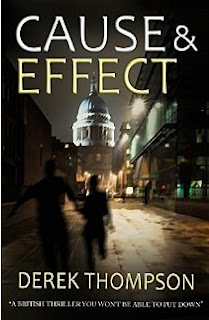 The third Thomas Bladen novel, Cause & Effect, is published later this year by Joffe Books. You can pre-order it here: