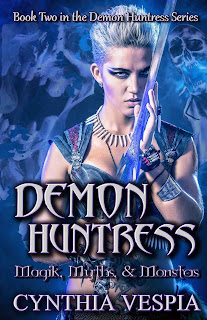 Musa Publishing, which receded into the mists last year, was more than just a publishing house. It was a gathering place for a range of authors, some previously published and others easing their way through that magical doorway for the first time. I also found it a wonderful opportunity to meet writers of other genres and discover, to my great delight, that we weren’t so very different in many ways.
But I have to say, I haven’t encountered many authors who have also been a model, a trained mixologist (yes, of course I had to look it up!), a licensed private security guard, and an award-winning video editor. It’s a wonder Cynthia found any time for writing!
Q1.      When did the writing bug first bite you?
I had the bug early on. I used to read a lot so I always liked the escape that stories brought me. It wasn’t until high school that I got really interested in becoming a writer. It was after reading Dean Koontz novel Intensity that I decided I wanted to be an author. Years later I actually got Dean to sign that book for me!
Q2.      You’ve had a varied and interesting past. Are there any experiences you draw upon in your writing?
I draw from all experiences in one way or another. That’s what writing is…experiences. Specifically, I used my time as a fitness competitor for the training scenes in Demon Hunter and I drew upon my experience as a security guard for Lucky Sevens.
Q3.      Given your work as a graphic designer and video editor, do you always have a cinematic approach to your books and stories?
I do but it’s more from watching a lot of movie and TV! I mean who among us writers has never visualised their characters as a specific actor, or wondered what their story might look like on the big screen?
Q4.      What are your creative goals in 2016?
Creatively I have quite a few series to either finish or continue writing. Demon Huntress will conclude, I’ve gotten a few ideas to expand my novel Lucky Sevens into a trilogy, and I’m working on 2 brand new series that I will be shopping to publishing houses and agents.
Q5.      Tell us about your latest book and how it came to be written.
Well, speaking of new series I just finished writing the first in a 7 part dystopian thriller. Without giving too much away I’ll just tell you it is a bit of Game of Thrones meets The Walking Dead! It’s about the survivors of World War III. I got the idea for it from watching (not reading) Divergent. I’ve never read the books so I have no criticism but the movie was lacking for me so much so that I wanted to make a better one…there goes that cinematic approach again!
I also just finished the second in the Demon Huntress series which is available now on Amazon, Smashwords, and Barnes and Noble. The idea for the Huntress came from a fan at one of the conventions I attended. She said “it would be cool if the hunter was a vampire.” So I took that suggestion and ran with it! Which is why Khalen struggles so much in the Huntress series.
Q6.      How do you handle some of the common challenges writers face?
I love everything about the writing process. And after finishing my new novel I’m excited and passionate about it again. What I struggle with, as most writers probably do, is in the marketing. Writing is a business and the marketplace is so saturated now with self-published novels that it is growing more and more difficult to stand out from the pack. You may have written a great book but if no one can find it then that’s where things get tough. And, unfortunately, it has become more of a popularity contest than it is about the writing. How many Facebook likes can you get, or Twitter followers? That becomes word of mouth for a novel but it doesn’t necessarily mean the novel is any good. I don’t know about you but I don’t have all day to be on social media…I’d rather be writing!
Q7.      Where can we find your books?
All of my books are across multiple digital platforms. Amazon, Barnes and Noble, Smashwords, Lulu, and my own website www.CynthiaVespia.com where you can also find out more about my graphic design and video services. I do custom cover design and book trailers at an affordable cost.
Q8.      Which authors and books continue to inspire you?
Dean Koontz will always be my first love, I just really enjoy his writing style. I’m also a fan of Mary Higgins Clark which is why I’ve somewhat left the fantasy genre behind and I’m leaning towards more suspense/thrillers. But I’m also always on the lookout for new authors as well.