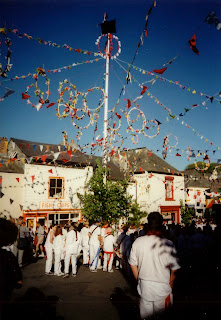 I don’t know whether there was finally enough sunlight in the morning to adjust my circadian rhythm, if it was because I was able to set Scars and Stripes aside with something approximating a smile, or even if I’d just managed to write a few decent jokes for greetings cards. But whatever that thing was, I woke up with a sense of well-being.

Everything was okay. The books would get published, or they would not. The sitcoms would live to see daylight again, or I’d charge them rent for living on my hard drive. I felt as if, in some indescribable way, that I’d arrived at a point of stillness.

Life still flicked dried peas in my direction, of course. Writing rejections, temping shenanigans, and the curious incident of the non-appearing garden waste bin, to name but three. Even today, someone thinks it’s perfectly acceptable to offer me £0.007 per word for copywriting. I, naturally, gave them my £0.112’s worth of polite decline. But in the balance, when I weigh everything up, it’s all okay.

Anyway, I really just popped in to say that today I am joining the Strictly Writing blog which I have followed avidly for some time. As the new boy, I’ve been grilled and toasted, and will be served with a vinaigrette salad. You can read the introduction here.

Whether you’re celebrating May Day, Beltane, Labour Day, Labor Day or even the anniversary of the birth of the Duke of Wellington, have a good one.