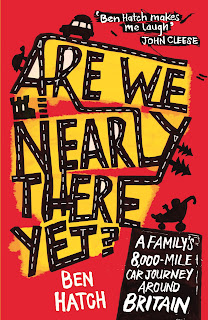 I know what you’re thinking – don’t tell me Derek’s ranting on again about trying to get one of his novels published. You can relax – that rant is coming, but it’s for another time. Today, my blog guest is writer and humorist Ben Hatch. Comments in blue are mine.

1. When did you first realise you were writing a book like this?

I am very slow-witted really. Incredibly thick. It wasn’t actually my idea to write a book about our trip. Basically I’d been commissioned to write a guidebook for an American publisher called Frommers. I’d never written one before. My background was in novels. The impulse to tell a story was difficult to shake though. There was so much that had happened to us during the five months we were on the road – physically and emotionally – I kept trying to crowbar it into the guidebook. I’d be reviewing Lincoln Castle say as a family friendly attraction and suddenly I’d slip in a reference to my having a kidney stone diagnosed the week before. Basically I wanted to write this unique guidebook that could be read also as a sort of travelogue. I had this fantasy that people wouldn’t just use it as a guidebook but would read it from cover to cover as a story as well. Of course nobody would have done and my editor quite rightly cut out a lot of the personal stories. It was a bit heartbreaking and he didn’t like doing this either because he liked the personal bits too. So in the end, after firing me from writing guidebooks (he did it very nicely) he put me on touch with my current editor at Summersdale. She liked the idea of a travelogue/memoir about our 8000 mile journey round Britain. So that’s how it came about.
2. Did you experience any difficulties with writing something so personal?

Yes. There was a terrible moment just before I handed it over to my editor. I couldn’t sleep the night before. In a way, throughout writing the book, I’d sort of seen myself as a character, someone apart from me. That had allowed me to be completely honest about my feelings about my dad who is sick during the course of the book and about what had happened to us; all the trails and tribulations. But that night I woke up in this terrible cold sweat about it. I’d never written non-fiction before and I was very worried because it was about my family and I. I’d given so much away. I had no idea what people would make of us all, and of me. They might hate us, or think I was a complete arsehole.

3. Describe your book for us if you would.
Tim Brooke-Taylor described it as “Outnumbered on wheels.” Although a lovely twitter follower summed it up better than I ever could. It’s a memoir, disguised as a travelogue that reads like a novel. The book’s about an 8000 mile road-trip round Britain that I went on with my family. Our kids were 1 and 4 at the time and the title has a double meaning – it’s what they say all the time, but it’s also a statement about like in general. Basically it’s a book about being in a family. Being a kid in a family and being a parent in a family. Hopefully it’s moving but also funny. The book’s available in Waterstones, on Amazon, and on Kindle for £1.99.
4. Are you affected by negative reviews?
No, not really. I don’t think too much about it. Not at all, no. It is a little upsetting to get a bad review, of course, especially from someone you admire or respect. I’ve been very lucky not to get too many bad ones. When you do, which is inevitable, it helps to imagine the person who’s written it is either a bitter, jealous rival or someone with warped and malign hang ups that have made them incapable of seeing the true worth of your writing. Perhaps they might even be classed as mentally ill. I also secretly hope that one day those who give me bad reviews, having been magically restored and righted as human beings by some religious miracle or touch of love, suddenly become hugely regretful for what they’ve done. They might then track me down, and humbly apologise in tears for having been so crass and disturbed. They could give me gifts. Presents. Cheese hampers. Crackers in tins, and wine. Like I say, I don’t think about it that much
5. Do you plan to write more directly autobiographical material?
Yes, I am working on a sequel to the next book called Road to Rouen. It’s about a 10,000 road-trip around France. Let’s just say there are quite a few tortoises in France.
6. What are your social tips for writers?
Social media tips or social tips? (Curse my typing skills!)
My social tips would mainly be to be pleasant wherever possible, try and bathe every now and again, don’t be late for appointments and if you’re meeting literary types wear a lot of bottle green and sleeves with leather patches.* Social media tips? Who knows! Facebook people, get on twitter, start up a blog. If you’re on twitter try not to boast too much about your book. Some writers go on and on about their books with links to Amazon etc. It’s very boring for others. I, of course, almost never do this as anyone who follows me on twitter knows. Right, guys!
(I first ‘met’ Ben on Twitter and I can vouch for his painful shyness. His handle is @BenHatch )
7. Are there any books or writers that have had a profound impact upon you?
Lots of books. Mainly Catcher in the Rye by JD Salinger. Growing up, I wanted to be Holden Caulfield so much. It was the book that made me want to become a writer. Other books that have influenced me: Adrian Mole (genius), Lucky Jim, Billy Liar, Fear and Loathing in Las Vegas. Everything by Bret Easton Ellis, Douglas Coupland. Graham Greene, Evelyn Waugh, Patrick Hamilton, Dave Eggers, Anne Tyler, Barbara Trapido. I’m also a big fan of Geoff Dyer and Richard Yates.
8. Is there anything you dislike about being a writer?
Lots of things. In particular the looks you get in the early days when you tell your friends you’ve given up your job to write a book. It’s like telling someone you’ve quit a promising career to try and turn mature cheddar** into gold. Also I am quite a sociable person, but being a writer is largely anti-social which is why twitter is so great. It’s like having an office where you can chat to people by the coffee machine, only you have an incredibly frightening boss who’ll only allow you to do this in very short sentences of 140 characters.
9. Are there any questions you did not want to be asked?
I’m very glad you didn’t ask me about that embarrassing incident involving the toothbrush in the book that I included at the last minute when my editor wasn’t looking and which still causes me lots of problems with relatives who can’t understand, WHAT I THOUGHT I WAS DOING.
Many thanks for the interview Derek. It’s been fun!