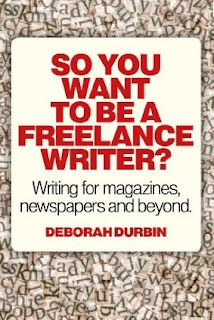 Whilst it’s undoubtedly true that the world of writing is a competitive one, it can also be a cooperative environment as well. And, while we often play the numbers game and look for a niche to nip into with the fervour of a Saturday shopper in a car park, writers are a community.
I recently heard on the grapevine that Deborah Durbin, a fellow scribe and freelancer, had written a book for those writers looking to plough an independent furrow. She has previously been very generous with her views on the freelancing scene and suggested some doors worth knocking on. It seemed only fair to put her in the hot seat again, to find out more about her latest project and to pick her brains until she yells, “Feinites!“

So, Deborah, you’ve been a freelance writer for a number of years. What changes in the industry have you noticed since you began, and how have you adapted your approach?
The most notable change I have seen since first becoming a freelance writer is the advantage of technology. When I first started I would have to research an article in the library, type it up on my electric typewriter (making two copies), send it off to an editor in the hope that they will like it then wait weeks for a reply. These days I can email an idea to a commissioning editor and get a reply within minutes. All my book contracts have been commissioned this way too.

In your new book, So You Want To Be A Freelance Writer, you draw upon your own experience. Which piece of advice or guidance do you wish someone had shared with you at the very beginning of your career?
To keep on trying. Once you’ve studied your market, learned how to present your manuscript and how to approach a commissioning editor, a lot depends on luck. There are many reasons why an editor might not be able to take on your work and it’s really nothing personal.

Does being a successful portfolio writer (non-fiction and fiction) create its own challenges – how do you prioritise your various writing projects?
I love the varied life of being a portfolio writer. My ‘day job’ is as a journalist and I never harboured dreams of being a fiction writer; that just sort of happened. My journalism writing comes first because if an editor is kind enough to commission you for a job, you need to deliver if you want to get more work from them. My novels tend to get written during the school holidays when my daughters are home from school and college and I write them by hand, whilst watching the telly or sunbathing in the garden.

Has the world of writing changed for women, in your opinion, and in which ways?
I personally think that readers don’t care a jot whether a book is written by a man or a woman. It’s the publishers that are the picky ones! Possibly 50 Shades of Grey would not have been such a success if it had been written by a man. The USP for the publishers was that it was written by a woman and a mother. However, when E L James first published her book, readers didn’t know whether it was written by a man or a woman. The same applies to J K Rowling. Possibly if she had written it as Joanne Rowling it wouldn’t have been so successful, but I doubt it. I do think women feel more able to write in different genres nowadays and not be limited to the Mills and Boon style of romance writing. Many women write about crime, horror and sex as well as their male counterparts now and I think this is thanks to publishers accepting that good writing is good writing, regardless of sex, age or race.

Describe a typical writing day.
No two days are the same for me, so a typical day isn’t really typical for me. Once I have done the school run and sent my other two daughters off to college, I always check my emails, Facebook, website and blog and then start work on whatever I’ve been working on the day before. Most mornings I will pitch several ideas to magazine/newspaper editors and carry on working until an email pings back with a yes please or a no thanks. If it’s a yes please, I will pencil it in my diary, along with the deadline, research notes I need to do etc. I occasionally write real life stories, so if I have heard of someone with a good story to tell, I will contact them and an editor to see if I can sort out a deal for them. If I have no journalism deadlines to work on I will work on my novel, but this is usually done away from my desk, in the conservatory or sitting on the sofa watching This Morning.I always go out for lunch because I love people watching and find listening in on other people’s conversations gives me lots of ideas. After lunch I check emails again and work for another hour on whatever I’ve been working on in the morning then I pick my daughter up from school and stay away from my desk until we’ve all had dinner. If I’m working to a tight deadline I will work during the evening, but I always have to have the TV or radio on in my office. I can’t work in silence, it disturbs me.
Are you working on a new book at the moment? Care to give us a hint!
I’m currently working on the third of my Now I Can Hear Dead People series. I hadn’t planned to write a third book in the series, but many readers have emailed me asking when the next book is going to be out. Being a trained journalist I find it much more of a challenge to write fiction, but I do enjoy it and find it’s a bit of escapism, so between deadlines I will be spending much of this year sitting in the conservatory writing that.
What’s the strangest thing you’ve ever written about?
I was once asked to write a feature about cellular memory and interviewed a woman who’d had a heart transplant and was convinced that she had adopted the personality of the man whose heart she had received. It was a fascinating piece to research and really opened my eyes to the possibility of cellular memory.
Where can we find out about your book/s?
All my books are available on Amazon or ordered through books stores such as Waterstones. You can find out more about me at www.deborahdurbin.com or go to my freelance writing blog at http://soyouwanttobeafreelancewriter.blogspot.co.uk/

Deborah Durbin is a journalist, columnist and author. She is also a Member of the Society of Authors and Women in Journalism