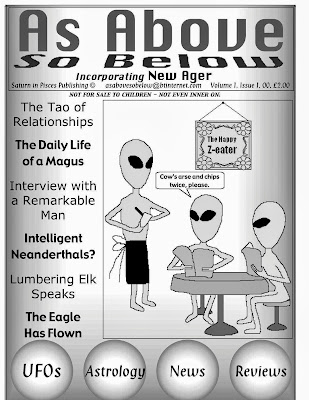 I write a couple of columns for a magazine and I was recently checking out my work on the net (what can I say, I’m a big fan of my own writing). And then, like an idea faery flicking my earlobe, it came to me.

What if I took one of the much-loved but rarely seen copies of As Above So Below magazine, co-written with David French, and put it online for a new generation of readers?

We had talked about it in the past, but shied away from the idea because of technical issues with the files and, frankly, wondering what the point was. Plus, that ideas faery probably wasn’t flicking my ear hard enough.

But now, thanks to www.issuu.com, it was as easy as uploading a massive PDF file.

You can read one of the mags online here:
http://issuu.com/aasb/docs/


The other thing that inspired me to do this was the excellent BBC4 programme about The Wipers Times, written by Ian Hislop and Nick Newman. The programme dramatised the events and people that contributed to the creation of a satirical magazine, produced on the front line in WWI Ypres.

We started As Above So Below because we felt there was a niche (and a desperate need) for satire in the alt lifestyle arena. It was also a way to showcase our own writing and to stretch ourselves as writers. With the mag we learned about deadlines, formatting, writing around a theme and the challenges of distribution when you are also responsible for publication.

Now, as I look at that first proper issue online (we never talk about issues 1 to 4…), I can see so much that I came to take for granted. The inventiveness, the playfulness and, at times, the vitriol for what we saw as values and ideals often chopped up into buy-it-sized pieces. It was all there at the beginning – characters, recurring motifs and an almost desperate desire to be heard and read (which was hopefully tempered over subsequent issues).

What I also like is the way we didn’t care what people thought. Remember when your writing was last like that? Writing because it’s what you want to write. Mostly, I think, I love the magazine because we made it happen all by ourselves and because, for a time, we had a cult following (albeit a small cult). It’s funny too.

So we’re thinking about releasing more mags online, if there’s sufficient interest, and seeing where it takes us. Incidentally, the magazine’s claim to fame is that, thanks to our friends and stockists, Geraldine and Bali, at The Atlantis Bookshop, a mag cover appears briefly in a More 4 TV programme: A Very British Witchcraft.

Now, have you ever reappraised some old writing or given it a new lease of life?