Skip to content
Even before I became an emerging author (that middle ground between no longer debut and nowhere near established!) I thought it sensible to turn a well-worn adage, ‘write about what you know’, on its head. Far better, in my opinion, to say: ‘know what you’re writing about’.
That usually means one of two things:
1.     Direct research.
2.     Indirect research by plundering your own experience, and sometimes other people’s.
While the novelist Leigh Russell made a trip to the Seychelles for her novel, Journey to Death, my research tales are of a more bargain basement variety!
For my debut espionage thriller, Standpoint, I wanted to know about Harwich International Port. Unfortunately, I went at it with some gusto and my enthusiastic request to see detailed maps and to know about the locations and practices of Customs staff probably had me pegged as an inept smuggler. Perhaps I should be grateful that I never received a reply, especially one that involved the removal of my front door. I did, however, pick up a useful police contact.
When it came to writing the sequel, Line of Sight, I found useful information on www.arrse.co.ukand www.ukpoliceonline.co.ukfor matters relating to mob and job. I also drew upon memories and anecdotes from brief stints working in Belfast, and those of a friend who’d served in the Armed Forces out there.
By book three, Cause & Effect, I must have got better at asking questions. Plus, I now had a little credibility from the previous two novels. In my explorations I inadvertently found out something about baggage scanners that I’m not allowed to reveal, a bank provided information about bankcard fraud – on the condition that I don’t name them, and someone from the Ministry of Justice referred me to the excellent http://www.insidetime.orgfor a question about prison procedures in 2004. Sadly, my query involving aerosol spray paints drew a blank so I fell back on my imagination. It seems there are some things that even the Internet can’t tell us.
In almost all of the above cases the information I acquired (or failed to) was largely for my own benefit. Very little of it made the cut and I’ve yet to have a review that picks me up on my research (not so with the British slang, swearing, sex, violence, etc.). One thing I did learn, which still surprises me, is that I already knew several people with firearms experience.
A sprinkling of facts, at the right time and in the right manner, adds to the realism of a fictional world and encourages that suspension of disbelief we’re always hearing about. Readers want characters and books that live on in their head after the final page, and we want them to want to return to the worlds we create.
Next time I might take a gander at international politics and US intelligence policy in post-war Europe. 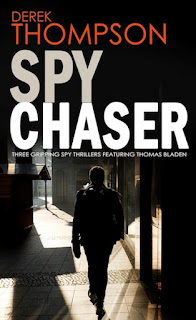 About me
I have written three Thomas Bladen espionage thrillers, published by Joffe Books in one volume as Spy Chaser and also available separately – Standpoint, Line of Sight, and Cause & Effect. Shadow State, the fourth book in the series, is due out later this year. You can find details of all my books here.
Update
13/11/2016 – Shadow State is now available on Amazon!
Amazon US https://www.amazon.com/dp/B01N3N2BJM
Amazon UK https://www.amazon.co.uk/dp/B01N3N2BJM