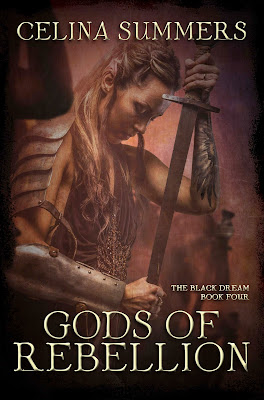 Writers are an interesting community. We bicker, compete, support each other and also draw inspiration from one another. It’s my great pleasure here to interview Celina Summers, who I had the good fortune to meet when I was part of the Musa Publishing family. She’s not only a savvy writer; she takes a scholarly and detailed approach to creating her fiction. Frankly, if you’re not inspired after reading this you need to go and read it again!

Q1 Tell us about your recent work and what inspired it.
Right now, I’m playing around with multiple genre mashups. Probably the best way to describe what I do is literary fantasy. My recent work has been set in 18thcentury Europe, Asia, and America, with time traveling, magic realism, mythology, and swords and sorcery combined with historical fiction. It’s a lot to keep straight. Greco-Roman mythology is a huge influence in my writing, having studied classical authors like Ovid and Vergil since I took Latin in high school. So while I have immortal entities that are based upon mythology, my main characters are having to confront 18th or 21stcentury problems, which creates fascinating conflicts for them.
This kind of multiple genre work is more difficult than the straight-up epic fantasy I used to write. The historical aspects of the story requires a lot of research, for one. I have huge storyboards on Pinterest with images of everything from costumes to knickknacks to architecture and art. All the details must be correct in order for such a world to work. So crafting the world is far more difficult. And the consequence, naturally, of writing something so different is you (or your agent) finding a publisher who is willing to take on your literary/historical/time travel/magic realism/mythological/romance/swords and sorcery fantasy novel. They can’t immediately see how to shelve such a novel in bookstores, and that makes them hesitant to take on a project that complicated.
So it’s definitely a challenge on many levels, but I love what I’m doing so I keep plugging away at it.
Q2 What is your take on the publishing industry at the moment?
The publishing industry is once again in transition. For indie authors and small presses who rely primarily on e-publishing, the options are narrowing fast. Amazon’s KDP is convenient and easy to use, so the market is getting flooding with really bad books. The other platforms like Barnes and Noble or Smashwords aren’t any e-pubbed writer’s top selling site. So authors who are self-publishing have one real shot at breaking through and that’s Amazon.
But not so fast—the Amazon sales algorithms are skewed. Preferred product placement occurs only if a book has enough ratings and reviews. Well anyone can get all their friends and co-workers to run off to Amazon and review their books, and many authors do just that. So it’s frustrating when you see books that should never have been published getting so many sales and reviews and popping up on your sales pages as suggestions.
That being said, the pendulum between traditional publishing and digital publishing is swinging back to a more balanced market. While the Big Five are still controlling the lion’s share of the book market, e-books are here to stay. Many writers (and I include myself in this) are learning how to use both routes professionally. I am self-publishing my backlist of small press-published books and adding new sequels to those stories, while my agent is representing my new work. The arrangement works well for us both.
Q3 What are you currently working on?
The primary project I’m currently working on is a series entitled Danse Macabre. In this world, Death isn’t the Grim Reaper, but a conglomerate of immortals who each are assigned a specific group of mortals whose lifespans they monitor. When a civil war breaks out among the immortals for control of humanity’s future, Morgaine, the Death of Art, is faced with a series of adversaries that are not only targeting the mortals in her domain but threaten existence itself. What results is the ultimate Danse Macabre, and neither the mortal nor immortal realms will ever be the same.
At the moment, I have several projects on my desk. But I just finished Symphony of Death, the first book in the Dance Macabre, so it’s uppermost on my mind. In fact, my agent received the manuscript yesterday.
I’m also working on a sequel to the two series I self-published in 2016—The Asphodel Cycle and The Black Dream. (By the way, publishing eight books in eight months looks like a really great idea on paper. But it’s a lot harder than you think it is and you have to work your rear end off to make that happen. Trust me.) The new book, which may turn into a series as well, is the story of the Asphodel heirs. The world of Asphodel is the retelling of major classical myths like the Trojan War or the Titanomachy using traditional fantasy characters and settings. So there are endless possibilities for future stories there. The Asphodel Cycle was my first published series, and coming back to the world after ten years away was a lot of fun.
I’m tinkering with an idea that’s a riff from my Harlequin Theater literary fantasy series. That world is set in contemporary American theatre, and revolves around a company that uses magic to integrate the audience into the performance. Think The Phantom of the Opera meets Something Wicked This Way Comes. That world is a lot of fun to play in.
And I’m building a couple of other fantasy worlds, revising my horror series, Red Ink, which is based on Jack the Ripper, freelance editing and sports writing. Safe to say I’m extremely busy. But I love it.
Q4 Ebooks or paperback, or both?
I don’t write with a particular medium in mind except for the Asphodel series. Unless you’re self-publishing or writing for a specific publisher, this isn’t a question a writer should really worry about. All my books that are currently published are available in both digital and paperback formats.

Q5 Name two books that changed the way you thought about your own writing, or even changed the way you write.
Kushiel’s Dart by Jacqueline Carey, and Daughter of the Empire by Raymond E. Feist and Janny Wurts. Both books revolve around female protagonists who find a way to succeed despite their gender.
Carey’s world is lush and voluptuous and vivid, having based her story in a world where a courtesan who’s been taught how to be a spy is the key to changing her society. Carey’s descriptive powers are incredible—probably the most intricate and extravagant world building I’ve ever seen—and her heroine is unforgettable. She is deeply flawed and superior at the same time.
Feist and Wurts set their heroine in a lavish, intense world with Oriental settings, culture, and traditions—which needs to happen more in fantasy. The story is about a girl who has always followed traditions having to take the reins of a once powerful house after her family’s rivals kill both her father and older brother. She learns that in order for her and her house to survive, she must play the political game better than any man in the Empire—and she cannot afford to unquestioningly follow the traditions that usually bind the players.
Both books feature heroines who don’t need to be saved. They are intelligent, cunning, and strategic. They use their minds to outplay their foes, and I appreciate the incredible stages those heroines have been provided as well.  Both books changed the way I looked at my heroines, and how I can give them the same stage without having to beat the reader over the head with, “She’s a bad ass. Get over it.” With both books, the writer in me was able to dissect how to establish a strong, victorious heroine without having to make her unfeminine.
Q6 How do you know when your characters have ‘come to life’?
When they won’t shut up. I’m one of those writers who ‘sees’ the story in my head and puts it on paper. I never outline, but I always know where the book is going to end. I just let the story play out—it’s basically like taking dictation for me, which irritates some of my writer friends for some reason. And as I’m writing full time now, I’m working 14-16 hours a day, 7 days a week. If the characters keep talking while I’m working, then I keep working.
Hate to break the flow. Don’t want to stop and then face a Samuel Taylor Coleridge “A maid with a dulcimer” moment and forget where the story was taking me. Of course, I’m not cranked up on opium so maybe it wouldn’t hit me the same way it did him.
Q7 What are your top tips for acquiring and then working successfully with an agent?
I’m a believer in going to conventions and meeting them in person. That’s how I acquired my agent. I went to World Fantasy Con, and hung out all week with a friend of mine (DAW author of the Touched By An Alien series, Gini Koch) and her agent (Cherry Weiner). Cherry asked me to submit my manuscript to her, and upon reading it she signed me. Never underestimate the possibilities of establishing an acquaintance with an agent first.
If cons aren’t your thing, then query. But when you do query, make sure there are no spelling or grammar errors. Learn how to write a great hook, which is more difficult than it sounds. Present your work in a professional manner—don’t try to be cute or clever. Use standard manuscript format. If you want literary representation, you need to demonstrate your professionalism as much as your work.
Q8 Where can we find out more about your writing?
The best places to find out more about me are my website and blog. I spend a lot of time on Facebook and Twitter, and for some reason people really like my Pinterest storyboards.  You can keep up with my articles on writing and publishing (like my recent series on the collapse of All Romance Ebooks and how they absconded with the 4thquarter royalties due every single author and publisher in 2016) on Blogcritics. I enjoy hearing from readers and writers both, and am happy to advise young writers who have a question. So if you catch me between writing blocks, I always appreciate the interaction.