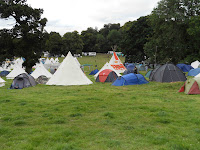 Notes jotted down from Port Eliot:

1. The literary scene is an exclusive club made up of people who went to Oxford or Cambridge and / or who have an MA in Creative Writing. There are other clubs, however.
2. It’s de rigeur to have at least one friend named Harriet, Chloe, Marcel, Rudyard or Parsifal. I once adopted a cat and named him Einstein, but I don’t think that counts.
3. By sheer coincidence, the children of authors, agents and editors have a tendency to become authors, agents and editors. This is either the result of osmosis or having parents who can bear the brunt of the unfunded internship.
4. Embittered, unpublished writers often can’t see the wood for the trees – which is a pity as there are some beautiful trees at Port Eliot.
5. An unofficial creche system is in operation, whereby wayward parents leave their wayward children to roam about all day (and much of the night), relying on the kindness and patience of strangers. On the plus side, it was probably one of those children who dropped the fiver that I found in a field.
6. Perception is like the weather. Give it a few minutes and everything changes.