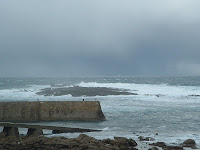 Find the bottom of my stomach, more like. “But what about the snow? Surely a boat can’t sail…” I realised I was sounding like an idiot halfway through my plea bargain.

She smiled. The sea won’t freeze, and anyway, it’s going to rain later – it’ll wash away your sins!

I put the phone down, stepped over a pile of unfinished work – the curse of the time-afflicted picture framer – and fetched out my coat from the closet.

Fifteen minites later, the car beeped outside. My stomach leapt. It was getting in practice for a command performance. The car was my gallows walk. When we arrived, I nearly kissed the snow-cpvered ground as I hear the words: dry dock.

When I’d finished dancing my jig – on the inside – I heard her voice waxing lyrical about the majesty of the sea and the power of the waves. Me, I gazed around silently, curious about her hidden world, but happy to remain at the edge of it. There were other sailors there, or boat people – whatever they called themselves; and a couple from France, judging by the accent. But Frankie, when I saw her hand touch the side of The Aspiration, her face lit up and I knew I’d seen a hidden side of her as well. Internet dating had been the starting point, but now it was something other. We lived in the same locale, yet never met except when she called me. That was the arrangement and it suited us both, for a time. It suited me no longer. The more I pushed, the more she retreated, and the more curious I became. I began to construct elaborate fantasies about her; I even wondered if Frankie was her real name or if the boat were hers at all. Or if I were hers at all…