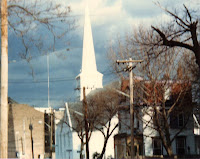 ‘Be still and know that I am God.’

How many times had Carrie heard pastor Gellard say that in class? Yeah, she knew God – saw him winking at her between the lines of her Student Bible. But did he know her? Did his all-seeing eye witness the pile of dishes left by her mum and friends, along with the beer cans and pizza boxes left out on the counter? And hey, if he did know then why didn’t he do something about it, huh? If she could see that mum needed taking care of, how could he be so blinkered? She thought about it all. Yeah, a blinkered God – that about summed it up.
Pastor Gellard looked up, made momentary eye contact and then continued speaking. Sometimes, Carrie wondered if the class were just for the Pastor’s benefit. I mean, it wasn’t as if she learned anything, not really. That same droning voice, week after week. I mean, come on, it wasn’t exactly jubilation at the word of the Lord. She tilted her head forward to stifle a chuckle. Where was the joy?
The droning had stopped, or at least it had changed pitch a little. Now he was talking about Outreach. Hell, that wasn’t even a proper word. Hell. She took a breath. Pastor Gellard had a fondness for hell – talking about it, that was.
“So, the Outreach Programme is looking for volunteers. You’ll get extra school credits and it would mean being away from home for one week’s initial training. If anyone is interested, please let me know.”
Carrie’s hand shot up, as if she were signalling to God. ‘Look, here I am. I’ve been still, and I know you. I’m showing you, right now, where I am, so you can get to know me.’