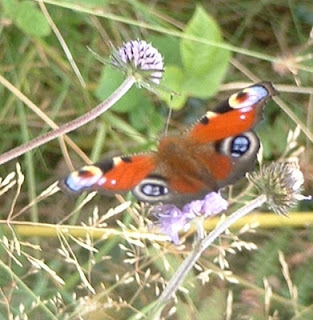 1. Does writing about topics that are so personal change the way you feel about them? Not necessarily making you feel better, but distancing you from it a little once it’s on the page.

Yes, that thing you said – it puts distance between me and the thing. I feel relieved of a burden. It’s like Dumbledore’s pensieve – the page is a silver holder for my memories, so that I don’t have to carry them around with me. If I want, I can go back and read or re-live that memory – or if I want I never have to feel it or think about it again. And if I do think about it, I can do so with more clarity for having written about it.

2. Do you look upon the finished, posted work as a piece of work in the same category as your other writing? And would you ever consider using it commercially (whether paid or unpaid)?
What other writing? Let’s see: random texts, e-mails, edited blurbs for the Daily Insider, and the very very very very occasional magazine article. Is it different? I suppose. It’s more “me.” It’s probably more likely to entertain, amuse, intrigu,e or offend the reader than other stuff I write. It’s certainly more honest. Whereas I’d never reveal my true thoughts in a magazine article, I tell it like it is in a blog post, because the blog posts are written for me and an invisible audience. The Daily Insider blurbs are written for business owners, directors of nonprofit organizations, educators, philanthropists, and concerned citizens. They are a visible audience, because I see them around town and talk to them, and my job is to relay the news and not tell them about motherhood and grief and marriage and my garden and what I cooked for dinner and how come I don’t like to fold sheets (because I’m short and the sheets are bigger than me and I just can’t get them to fold neatly).

Of course I’d consider it using commercially. And of course I’d rather get paid. But I think I’d be just as excited, paid or unpaid. OK, maybe more excited with the paid option.

3. What’s the best – or worst – feedback you’ve ever received about a piece of intensely personal writing? (I still have the letter written to me after my piece about my brother was printed in a national newspaper.)
Well, jeez, that’s kind of tough question. I have some RF (Regular Feedbackers), but I have lately been getting a lot of random comments from readers who’ve stumbled onto the blog and are identifying with the grieving thing. I got a wonderful comment from a reader who basically said, “Yeah, grief sucks. I just lost my mom and my dad and every time I think I’m getting myself together I’m hit by a ‘sneaker wave’ of grief that knocks me sideways again.” And I thought, “Wow, she read the whole post and it affected her enough to LEAVE A COMMENT.” Even though I know people read the blog, it’s always surprising when I get actual evidence of that fact.

The worst comment I got was when I was writing about my weight and I got some snarky comment from a person I imagine as sort of a self-righteous personal trainer type (or replace “self-righteous” with “asshole,” if you prefer) who said that maybe I should go easy on the ice cream or something like that. I mean, well, DUH. I wasn’t writing the post to get ADVICE. I already know what to do. I was writing the post because I was trying to work out why something that seems so simple (eat less, exercise more) is, in practice, one of the most difficult things to do, EVER, for 8 million quirky reasons that have nothing to do with logic or common sense. Which is why human being are interesting, no? We do SO MANY things that don’t make sense, and don’t benefit ourselves in any conceivable way. So shut the hell up, Asshole Personal Trainer Dude.

4. Do you think that writing about personal matters requires a certain kind of…ruthlessness? Or does that only apply if the person you’re writing about is still living?
I grew up feeling that my parents were always looking over my shoulder, because they were. I will never escape that feeling. I’m still worried about what my mom thinks, dead or not. I still don’t want to hurt her.  My dad – well, he could probably take it. (But it’s not like I’ve TOLD him about my blog, is it? Wimp.)

But if I knew a friend were to read my blog and I had something bad to say about him or her, I’d be scared of losing the friendship over it. I might choose not to write about it. In fact, I think I did lose a friendship with – well, it’s complicated – a sort of ex-boyfriend-but-not-really from college that I got back in touch with over Facebook and I invited him to read my blog only I forgot that I mentioned him in my blog post that day and wrote something about a college romantic interest who was a commitment-phobic, whirling vortex of neediness with a big nose and for some reason I’ve never heard from him again.

So I guess I was ruthless that one time, but I still feel badly about it.

But seriously, that guy’s nose was REALLY BIG.