Well, here we are – a whole year to play with and a tantalisingly empty writer’s diary for me to fill up with my scribblings. If you read my end-of-year post for 2015 you’ll know I’ve been thinking about what helps or hinders writers getting their work started, developed, completed and read.

The Guardian recently ran a brilliant piece that addressed the homogenous state of UK publishing – http://www.theguardian.com/books/2015/dec/11/how-do-we-stop-uk-publishing-being-so-posh-white-male – and many of the contributors had suggestions for bringing about change.
However you define yourself as a writer (and I include gender, ethnicity, culture, religion – and no religion, class and politics in the mix), I think it’s a safe bet that most of us have felt excluded from the publishing party at some point.
Is there an exclusive club in the literary world for those who have the right background, the right education, the right connections and the right understanding? If so, I don’t think it’s a deliberate conspiracy (which makes it no less unjust). Most people, unless inspired, challenged or in some other way liberated, like sameness. Maybe it’s a tribal mentality thing; a desire to read / hear a voice similar to our own, or at least one that we feel speaks to us.
I once approached a newspaper with a proposal for a column written from the perspective of an aspiring (and hopefully developing) writer, taking the reader from first draft all the way through to publication and beyond. It was rejected with the reply that ‘they preferred to approach their own people for that sort of thing’. More recently, I wrote a piece for a literary magazine which, I was told, was suitable, edited down, as an unpaid letter, but unsuitable as a paid article. Apparently it just didn’t feel right. Now, in fairness to both parties, my writing is the product of my experiences and education, and limited by them, so I am probably not their sort of person. As I’ve said in the past, not everyone gets to go to the prom.
I think what matters – now, more than ever – is that we writers each find our own, authentic voice. That also means being willing to work at our craft and to commit to the time, effort, honesty and pain (yes, really!) that appears to be necessary to deliver something real and vital on the page.
We need to know who we are in order to understand what our work is about. Not just for the pitching and the introductory letter, important as they are, but also so that we see our work clearly.
Last month I was on a Skype call with Thorn Sully, Editor-in-Chief of A Word with You Press. We decided to each read out an excerpt from our novels – Almost Avalon, in Thorn’s case, and my unpublished novel, Scars & Stripes. I usually pitch S&S as a transatlantic comedy drama, or lad-lit, but – based upon a dramatic scene – Thorn suggested I’d actually written literary fiction. A light glowed dimly in the recesses of my mind. Maybe I was seeing the book all wrong. Someone else had once insisted that, for a comedy, there were some surprisingly dark, psychological episodes. At the very least it’s a different filter to look through when I next start refining / submitting / pitching it.
All of which brings me to the new year manifesto – and thanks for reading this far down the page.
I was lucky last year – very lucky. And I know what it felt like to have my nose pressed against the glass for so long. Sore, for one thing.
In light of all that, I would like to participate a little more in the writing community.
This is my charter for 2016.
1. I will read / re-read a stack of books and ensure that I write a review for them afterwards. My list, in no particular order, starts with: The Faery Gates of Avalon – Gareth Knight, The Maltese Falcon – Dashiell Hammett, The Last Kabbalist of Lisbon – Richard Zimler, The Mabinogion, Doubting Abbey – Samantha Tonge, The Art of Letting Go – Chloe Banks, Narrow Dog to Carcassonne and Narrow Dog to Indian River – Terry Darlington, The Chapel in the Woods – Susan Louineau, and On Writing – Stephen King.
2. I am open to blog post swaps with any other author who is comfortable hosting a piece that relates to my thrillers. If you are interested, in the first instance, send me a direct message on Twitter – @DerekWriteLines – so we can see if our blogs are compatible. Different genres are fine.
3. I am offering an hour a week if I can help other writers. I don’t have a magic wand or secret access to movers and shakers. I have, however, tried lots of different types of writing and I’ve made lots of mistakes! In practice, an hour is long enough to answer a few questions, read a synopsis, give input to ideas or offer some suggestions if you’re stuck. Again, contact me on Twitter by direct message – @DerekWriteLines. 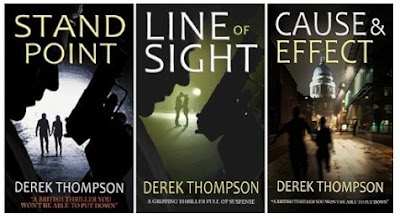 You can find links to these and my other books here:
https://www.pinterest.com/derekwriter/derek-thompson-books/