How many times have you heard the phrase ‘not your average hero’?

When Thomas Bladen first came into my consciousness / novel / repertoire, I knew very little about him. I could write it all on a large stamp:
1. No ninja skills.
2. Not suave and sophisticated.
3. In a relationship of sorts.

Pretty average, in fact. The relationship element intrigued and initially confounded me because I couldn”t see how those two aspects of his life – working in surveillance and being with Miranda – worked together. It took a while to realise that was the point; he kept those two worlds separate. One of the major conflicts throughout the books is around what happens when those worlds collide and start to affect each other.

Some reviewers have been critical of Thomas’s devotion to Miranda; they want to see James Bond and not ‘what happens when James Bond goes home’. I really like it though, and so do other readers. It adds emotional depth. Given time and practice, anyone can pull a trigger. But lying to those closest to you? Well, that takes a different kind of nerve and results in human scale consequences.

This post is a cryptic Valentine’s card from an author to two of his favourite characters.

To Thomas and Miranda, wishing you the best of luck for the future.

Spy Chaser, an anthology of the first three Thomas Bladen espionage thrillers (Standpoint, Line of Sight, and Cause & Effect), is now available in paperback. To celebrate, Joffe Books is offering Spy Chaser as a FREE download from Feb 14th to Feb 18th. 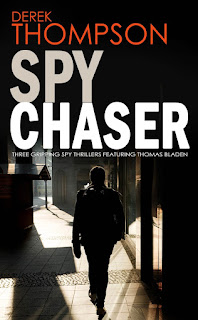