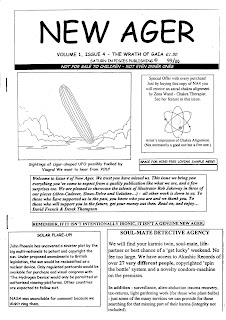 Sometimes a ‘no’ can end up with a ‘yes’ you might never have imagined. Somewhere better.

Years ago, I wrote an article combining modern astrology and the Tree of Life. In it, I sought to use established correspondences on the Tree as a way of re-interpreting and psychologically resolving some of the apparent conflicts. And yes, I was that po-faced about it at the time.

Back then there was only 1 or 2 magazines on the market. I plumped for Kindred Spirit and offered them the piece. The then editor (who has left, long since) wrote back, expressing an interest and asked me to re-edit the piece down and make it ‘more accessible’ to the reader, for their magazine. All music to my ears (whale music, probably).

I must have spent about 4 hours on rewrites, reframing and generally changing the piece completely – for the better, I hoped. I sent off the improved article and awaited a print date at best and a request for more tweaks at worst. But, as any optimist or pessimist will tell you, the best and the worst can sometimes far exceed our expectations.

The editor wrote back, thanking me for my submission and regrettably advising that they were not interested in using the article. I responded, somewhat impolitely, asking why they hadn’t said that in the place and avoided wasting my time. A second reply swiftly followed, apologising for any confusion and explaining that they normally sourced their articles and interviews from publishers, representatives, authors and the like. i.e. not from lay people like me. Or, to put it another way, a magazine reader.

The editor was new and, in the end, honest. But I was still peeved. I mentioned it to a writer friend, David French. His response is etched into memory: “Bastards; we’ll start our own magazine!”

And so after a short while, New Ager magazine was born – on a photocopier where I worked. Ours would be a satirical magazine though. Issue 1 was 5 pages of double-sided A4 silliness. It cost £1 and if the readership exceeded 30 I’d be very surprised. The strange thing is – looking back at it now – how most of the essential elements were there at the beginning: product adverts, news, interviews with new age luminaries, de-classified ads, music and book reviews. Even two of the characters that still frequent the mag made the debut edition.

It was a bit like two boys starting their own comic. We even introduced our first free gift in Issue 2 – a laminated ‘Well Manifested’ card – ideal for births, deaths, wedddings, accidents, divorces and embarrassing legal proceedings. According to the cover I have before me.

We only produced a mag every 6 months or so and treated the whole thing like an adevtnure. Friends who had a shop – Lisa and John Coward, take a bow – saw the joke immediately and became our first retail outlet. They’re still with us today, patiently waiting for the next Issue.

Other would-be writers became interested in what we were doing. Sadly, often not interested enough to purchase a copy. Issue 3 carried a cover line: ‘Do you have an article or investigative report that would be suitable for New Ager? Tough. Print your own magazine. We had to.’

We added 2 more shops – in Bristol – and received our first feedback.
“I almost shat myself laughing!” Joe McNally, then Associate Editor of Fortean Times. (They kindly gave us a plug, afterwards.)
“This is crap, no more please.” by Mr A Nonymous.

Issue 4 (The Wrath of Gaia) broke new ground for us. David French and I drew cartoons and I wrote a crossword offering a prize for the first completion received (no one ever bothered). It was the first outing of our tag line: NOT FOR SALE TO CHILDREN – NOT EVEN INNER ONES. Our influences – or targets – included: alternative medicine, planning committees, Eastern philosophy, death (me – naturally), extraterrestrials, conspiracies, relationships and sinusitis.

In many ways, we had arrived. And as any good traveller knows, arrival is just the start of another journey.