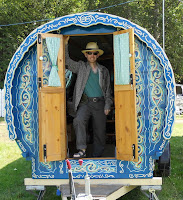 Okay, just this one and then I’ll shut up about it. As you’ll have gathered, we enjoyed Port Eliot a great deal – all the photos are Anne’s, by the way. There’s such a range of authors and performers that there’ll always be something to inspire, entertain or crush you (because the person speaking is just so damned GOOD at what they do). A special mention has to go to The Idler Academy tent, which managed to combine an engaging programme of speakers with an atmosphere all of its own. Think Tom Brown’s Schooldays meets a student revue and you’re halfway there.

Altogether, we saw James Attlee, Simon Day (twice, in my case), Dr Mark Vernon, Simon Munnery, John Cooper Clarke, Tom Uglow, Jackie Juno, Ed Harcourt, RSVP (where we learned to dance Bhangra style) and Sea of Bees. We saw two films at the open air Cinena Paradiso- North by Northwest (where the mozzies did their own biplane tribute by attacking us) and The Red Shoes, while indoors at the Paradiso Piccolo we watched The Barley Mow. Peter Gordon’s cooking demonstration was very good, as was the tour of the house and nipping out of the venue and around the corner to see the church at St German’s with its Burne-Jones stained glass windows.
I never expected…
– Wheelbarrows as the preferred mode of transport for small children.
– To see so many pregnant women – it was like something out of Dr Who. Or Alien.
– To see Suggs from Madness, sitting in an audience.
– To find Bob the Builder nappies dumped on the floor of a chemical toilet cubicle.
– To hear people laughing at Homer – the Greek one, not from The Simpsons.
– To see a performance poet I met on a comedy writing course two years ago.
– To meet someone from a yoga class ten years ago.
– To see vandalism.
– To hear that some locals were determined to get in without paying – and had.
– To hear the music through my sternum. At two in the morning.
– So much litter on the last morning – bottles, plastic glasses and Ocado receipts.