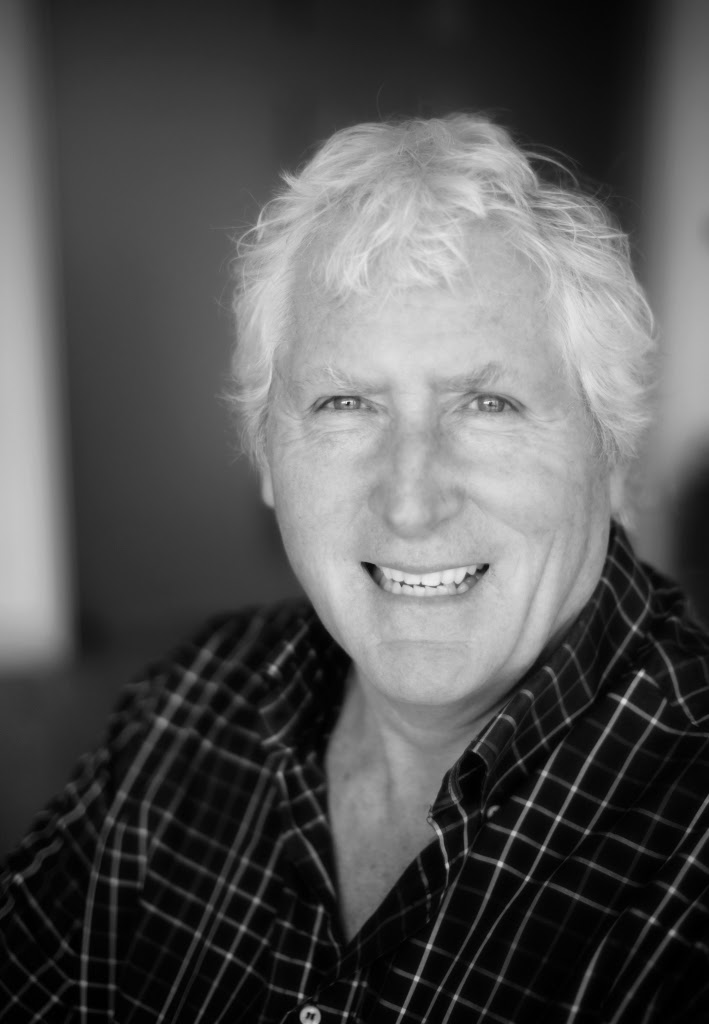 Everyone has heard one of those apocryphal stories about going on holiday, on the far side of the world, only to meet someone from your home town. My version of that was a happy coincidence, encountering author John Hanley online and then finding out he is based in Truro – just up the road from me (if the road is 25 miles or so of the A394).
John is both a dab hand at using social media to promote his books and willing to share the fruits of his labours – a blogger’s dream!
1. John, we met over social media. How important has social media been to you as a writer?
When I started promoting my first book I had no experience of social media so I started with twitter by following tweeps who had confessed to enjoying reading in their profiles. I then extended this to those who followed authors who had published books similar to mine. Until I passed the 2,000 follower mark it was a bit of a struggle but now I’m picking up a dozen or so new tweeps each day. I did a cull recently after discovering that nearly 1,000 of those I was following were inactive! I use Just Unfollow to manage and categorise. Tweetdeck is also very helpful for retweeting and scheduling.
I read a few books on social media and plunged into facebook without really appreciating its nuts and bolts. I have been posting background detail especially photographs about my novels on my fb author page for some time now rather than try to manage a blog on my websiteas it is far easier! I now use twitter to drive potential readers to both those sites.
Fortunately I discovered ASMSG (Authors Social Media Support Group) early on and now engage with their nearly 1,000 members in tweeting, retweeting, sharing on fb, liking on Amazon author pages and rating and voting on Goodreads.
LinkedIn has also proved a very useful resource and I’ve enjoyed networking with authors all over the world though I am still surprised by some of the requests I receive especially from members who are not authors.
2. How did the character of Jack Renouf first speak to you, and when did he appear?

Jack has been speaking to me for a very long time as we share so many interests though he is far more headstrong and adventurous than me! He was born in 1920 – the same year as my mother. I grew up in post-war Jersey where my mother had been trapped for five years by the German Occupation of the island. I had often wondered what it must have been like for a young man who had just left school in 1939 and how he would have coped with the harsh reality of war.  Nearly all young men of his age left the island though most of the young women didn’t as they had family obligations. 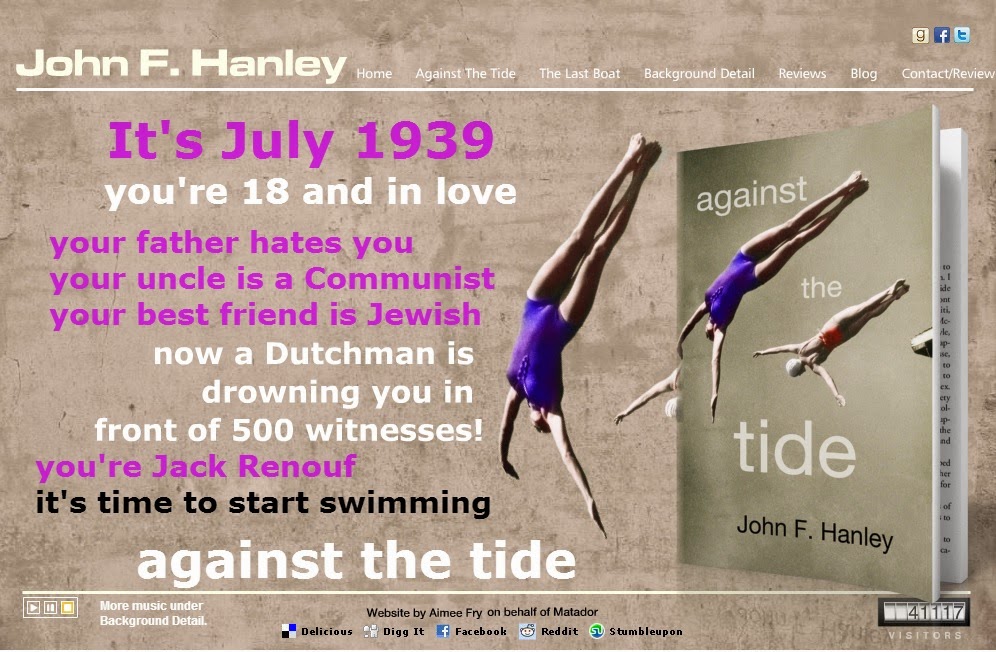 3. Research is obviously a key aspect of your writing – have you discovered anything that changed how you wrote the books?
What I find quite amazing is that over 70 years later new facts are still being discovered about that period. After the liberation in 1945 the UK government carried out a full investigation into what had happed during the Occupation. The subsequent report has been sealed until the year 2045! However, from information I had picked up from family and friends I was aware of certain lines of enquiry that I might follow and have been able to unearth some stories which I have been using in my “fictional” work.
My principle resource has been my extensive library of second world war books especially the 200 or so items specific to the Channel Islands which I have collected over the past 40 years. During the course of writing Against The Tide I collaborated with someone who had been a Hollywood screen writer and he suggested I beef up one of the sub plots of the novel. This involved a whole new line of research as I always try to make events as realistic as possible. In this case I constructed a complete story around a shipment of industrial diamonds from the Belgian Congo to Jersey. During the research I discovered that not only was there a law firm in the island which represented the very company around which I had based the story but that the Germans had been working along the same lines to defeat the embargo imposed by De Beers to prevent them acquiring these essential elements for their factories!
4. How did you choose Matador as a publisher?
I followed the traditional route of trying to find an agent for several years without success and, after retiring in 2006, decided to take the gamble I was asking of a publisher and risk some of my own money on my novels. I read Harry Bingham’s book “Getting Published” which had been recommended by the Writers’ & Artists’ Yearbook and researched several alternatives before settling on Matador, which is the fiction imprint of Troubador – the mainly educational publishing company I had come across during my teaching career. Troubador offered a full publishing package and Jeremy Thomson the managing director was very honest about the potential outcomes and the poor chances there would be of actually making any sort of profit. The quality of their product was much superior to several other companies I approached though all were quite frank about the responsibility I would have to promote and market my own work.  In choosing an established publisher I have been through the same process as an agented author and experienced the joy of intensive copy editing and proofreading as the company will not print work until the editing is completed to their satisfaction!  I found the cover design process very interesting and even though I came up with most of the ideas Troubador’s product management team was extremely helpful.
One aspect of publishing I hadn’t really considered was the word count of my manuscripts. I’d read in several places that a first novel shouldn’t really exceed 80,000 words. It was only when I discovered how heavily publishers had to discount their books for Amazon and other major booksellers that the penny dropped! Both my novels were over 120,000 words so the production costs were relatively high but the price point remains the same for most paperbacks which means profits and therefore royalties are severely squeezed once 100,000 words is exceeded. Of course the more books you print the better the unit costs but then they have to be stored prior to distribution and that costs as well. None of this applies to e-books but I still have a fondness for hardcopy and my next novels will not exceed 90,000 words!
Another aspect about which I was unaware was the kindness with which the taxman treats authors allowing initial losses to be set against non-writing income. My accountant told me about this though I doubt he would recommend authoring as a means of feeding a family. 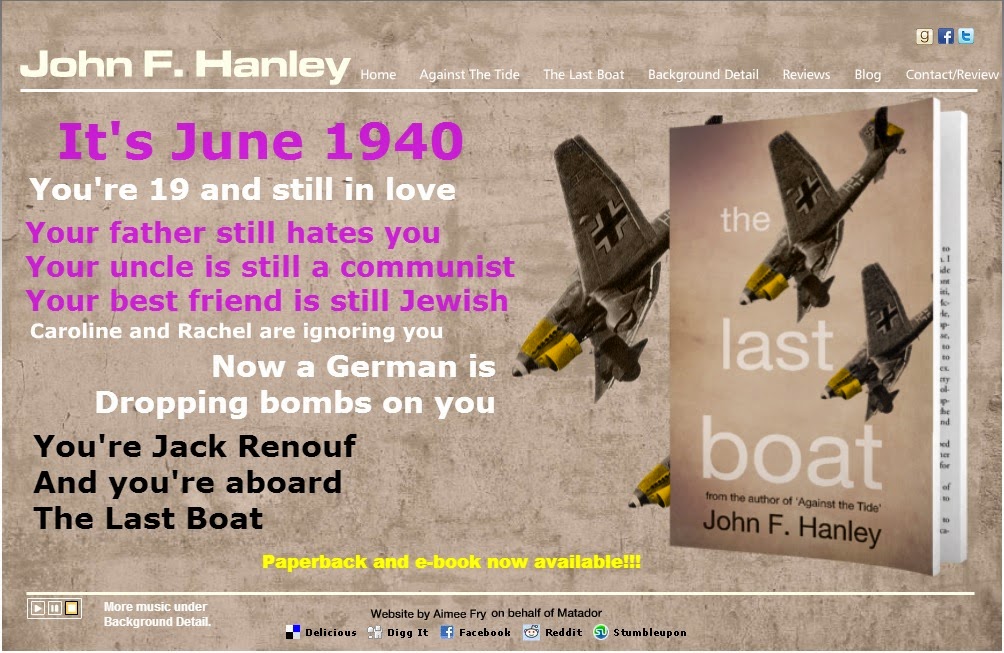 5. Any tips for balancing being an author with the time and effort required to maintain the profile of your books?
If you look at my facebook author page you will see that I spend a lot of time providing historical background for potential readers. I do find that an engaging process but add that into the basic social media activities then time left for actual creative writing quickly disappears. I’m not too worried at present as I’m still new to this business and am confident that I can find the necessary time for writing the next novel in the series especially as I’ve decided to limit the number of words!
6. Just out of curiosity, did you attend the Writers’ Day in Truro in 2012, put on by me and Literature Works?
I didn’t know about the Day but would have attended if I had.
7. Where can we find out more about you and your books?
Here are my links:
My website: AGAINST THE TIDE:  http://bit.ly/1hSTWoe
My website: THE LAST BOAT:  http://bit.ly/1kHD831
AGAINST THE TIDE regional Amazon link: http://bit.ly/1h9fLd8
THE LAST BOAT regional Amazon Link: http://bit.ly/1mjfkT1
Goodreads author page: http://bit.ly/1lOZyNK
Facebook Author Page: http://on.fb.me/1nNeCxa
Amazon Author page: http://amzn.to/TlgUKK
Troubador AGAINST THE TIDE: http://bit.ly/1oXgR3q
Troubador THE LAST BOAT: http://bit.ly/1uGqxjP
Review link:  http://bit.ly/1qxYZMf
8. Any other experiences you’d like to share about marketing your books?
I found the Cornish press quite helpful and have been interviewed by the West Briton and broadcast on BBC Radio Cornwall.
As the books are largely set in Jersey I was able to secure interviews with local press outlets there as well. As a by-product of publishing my first novel I was appointed as the adjudicator for Jersey’s Eisteddfod Literary Section last year
I invited the Cornwall Library Service to stock my books and I now receive a small fee based on borrowings from the Public Library Lending Service each year.
Waterstones in Jersey were happy to stock my first novel especially after the publicity there surrounding the launch but I have not had any success with booksellers in Cornwall even though I have been on Radio Cornwall and appeared in the West Briton.
I’ve appeared at a couple of local organisations as an after dinner speaker and this is an excellent method of promoting and selling books though it can be quite exhausting!